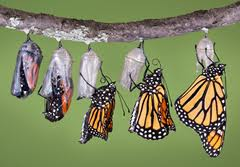 There comes a point in the life of certain caterpillars, when they have eaten enough; when enough nutrients have been stored, then the caterpillar reaches begins to spin a silk pad on a leaf or twig and proceeds to hang itself upside down from this pad.  Slowly it begins to molt its outer skin, leaving itself encased in its green chrysalis.

The creation of the chrysalis itself is an incredible process, for this is not just some special substence that the caterpillar excreets for the job; what it is is the caterpillar’s own skin transformed into this hard green shell.  The caterpillar willingly unraveles itself so that it can allow the change to occur.

Inside the chrysalis an amazing transformation takes place. The caterpillar’s body does not just undergo a complete and total physical transformation; its body completely breaks down into a “soup” of cells which, over the next few weeks reconstruct themselves into a butterfly.

The caterpillar doesn’t resist the pull of change; the instinct to stop eating and begin the next stage of its journey. It doesn’t lament what it will lose by ceasing to become a caterpillar, nor does it try to justify why it should continue its existence as a caterpillar when its heart is telling it that it’s time to let go. One other thing a caterpillar does not do is to worry about helping other caterpillars to recognize and listen to their own instinctual pull.  Instead it simply acts on its instinct and trusts that this is the best thing that could happen at this particular moment in time.

No, the caterpillar does not resist.  It simply stops what it’s doing; no matter what it’s doing.  It stops with no fanfare mid crawl; mid bite; and begins to spin its silk pad, letting everything it was dissolve into nothingness, trusting that the universe will take care of the details, and proceeding to move on to the next state of existence. It surrenders to its heart and in so doing begins the most important transformation of its life.

So too does there come a point in the life of every individual when they are prompted by signs from the universe; indeed by the urgings of their own heart to simply stop being who and what they are; to surrender themselves to the transformational power of their inner-being.  When they do heed the signs they begin to undergo an incredible transformation; a spiritual evolution that will turn their world upside down.

This transformation is not always pleasant.  In fact, sometimes it can be downright painful, for the changes involve breaking you down; stripping you of every thought, every belief, even those relationships that you associate with being you.  It will strip you of everything; reducing your ‘self’ to a protean soup of possibilities, and then will reconstruct you into the ‘you’ that you were always meant to be.

But here is the amazing thing, instead of losing your ‘self’ during the transformation, you emerge on the other side more ‘you’ than you could ever have imagined being, and with an understanding and a perspective that would have been impossible in your old way of being.  Suddenly you can see what it was that you were missing; why it was that your old life never seemed completely satisfaction.  And once your wings have dried in the sun of understanding, you will shake them out; spread them wide; and begin to fly.

One thought on “The Chrysalis Effect”